The City of Maple Heights has promoted Jaimie Hasenohrl to the Assistant Director, Department of Human Services; and Robert Dloniak, Foreman, Service Department.

Jaimie has been with the City since 1999; beginning her career with the Maple Heights Senior Center as a Human Services Supportive Service worker. Jaimie holds a Bachelor’s Degree in Gerontology from Bowling Green State University, and during her tenure, she was promoted to the Supportive Service Coordinator. In her role as the Supportive Service Coordinator, she  conducted home visits, assessments, arranging meals and transportation; additionally, she assisted the City with grant writing, providing reports to the Western Reserve Area Agency on Aging (WRAAA) and the Cuyahoga County Division of Senior and Adult Services (DSAS), where she was instrumental in the City receiving a perfect audit.   In her new role as the Assistant Director, she will expand upon her 20+ years of service and experience and continue to be an asset to the residents of Maple Heights. Congratulations, Jaimie!

Robert began his career with the City in 2000; and has extensive knowledge and expertise in small engine repair.  He began in the City as a Driver 1 Laborer, and has been involved in every aspect of the Service Department’s deliverables his entire 22 years.  He enjoys working on cars and trucks, and has experience rebuilding lawn mowers and golf cart engines.  He enjoys spending time with his friends and family outside of work.  In his new role as Foreman, he will continue to be an integral member of the Maple Heights Service Department in all areas with his knowledge and his leadership.  Congratulations, Bob!

Mayor Blackwell is pictured with both Jaimie and Bob. 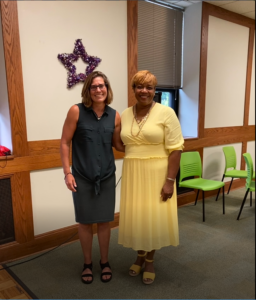 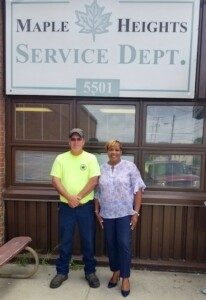